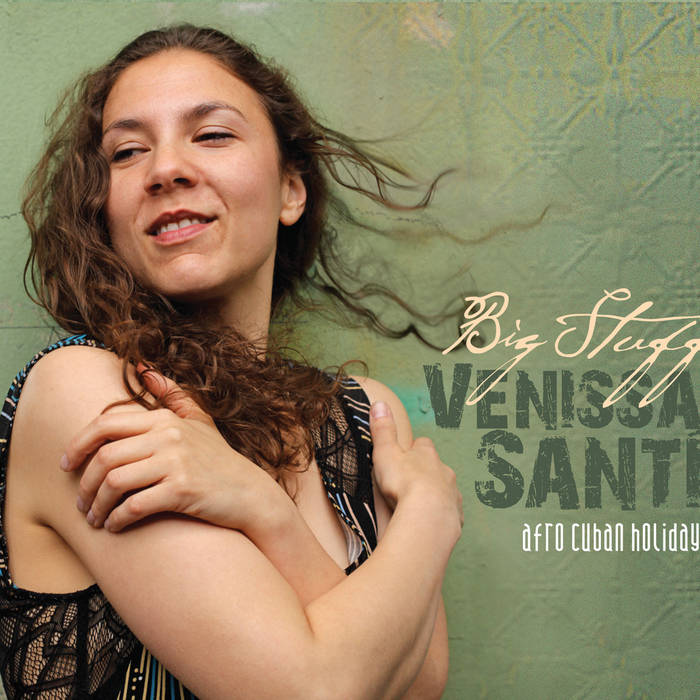 Just what is so special about the vocalastics of Venissa Santi - just what is so singularly unique - is so eminently clear on Big Stuff: Afro-Cuban Holiday, the brilliantly innovative follow-up to her 2009 Sunnyside Records debut, Bienvenida. If at first blush this record appears to be a mere tribute to the great Billie Holiday, it is clear that first impressions can be somewhat deceptive. True, this is Santi's homage to the legendary singer. However the music on this record comes from the very depth of her soul that this is so much more than a tribute: it is more like an anguished cry, rich in the metaphor of Afro-Cuban-Blues, cry of sisterhood that is lifted up in elevation to the celebrated ghost of Ms. Holiday.

Just as she was on her first album, Santi has once again channeled her ideas through percussion-colourist and long-time band mate François Zayas, who is responsible for the majestic arrangements of 12 songs with which Santi, in turn, re-imagines the heartfelt repertoire of Billie Holiday in an idiom that melds the heartbeat of bata and offbeat of clave with African-American deep song. Also joining the vocalist on this musical odyssey are trumpet and flugelhorn players Tim Thompson and Chris Aschman, the late guitarist Jef Lee Johnson, pianist John Stenger and bassist Jason Fraticelli. Special appearances are also made by bassists Paul Klinefelter and Madison Rast, clarinetist Jon Thompson and percussionist Cuco Castellanos.

The origins of this music are vividly recalled by Santi, who remembers how Danilo Pérez invited her to share the stage in Philadelphia's Kimmel Center with such luminaries as Kurt Elling, Sheila Jordan, Lizz Wright and Claudia Acuña among others on a gig that was designed to present a series of homages to Billie Holiday in May of 2010. For Santi to be included in a playbill that comprised of such stellar artists was both a privilege as well as a chance to do something truly special. She and Zayas, went to work on selecting an appropriate Billie Holiday repertoire; then transferring it to the landscape of danzón, guaguancó and bolero. All this happened about a year from May 2010.

Next came learning the challenging arrangements that Zayas came up with, swirling from out of the fiery cauldron of Afro-Cuban music. This took the musicians close to six months to master; a memorable effort that, together with the fact that this homage was written in Afro-Cuban idioms, made the project so distinctive. The memory of a show that played in Billie Holiday's birthplace, and was later broadcast on WRTI radio on Mother's Day a couple of weeks later, lingered long and hard with Santi and Zayas. They concluded this was music worthy of a longer life vis-a-vis a record that would preserve both the beauty and authenticity of this Afro-Cuban odyssey into the heart and soul of Billie Holiday.

Santi acknowledges that following the 2010 performance, it was not easy getting into character for the next stage of the project - the recording of Big Stuff: Afro Cuban Holiday. "Life happened and we had great odds keeping our crew from finishing the record," says the vocalist, "and in the journey of putting these songs together, while I was delving into the lyrics and repertoire that I had started checking out when I was fourteen years old, I realized I had grown up into the songs," explains Santi. "The journey has been long and at times dark. By daring to interpret the tunes as uninhibited as possible it enabled me to come face-to-face with something bordering on danger and I experienced great gratitude. What emerged was an-almost four-year labor of love that overflowed onto this record," she concludes.

Nothing can really prepare the listener for the transcendental melancholy of Billie Holiday's music like "On the Sunny Side of the Street," which is deliberately set as the gateway to the album, in a prelude to dimming the lights and before entering the world of Lady Day, who virtually changed the way a song ought to be interpreted. "I started to sit with the tune daily, doing just what the lyrics require, taking the sunny side with my son on cold morning walks to school to stay warm," says Santi. "It was an extreme honor to record with Jef Lee Johnson as well. I miss him dearly."

Santi's musical intellect that combined with the erudite delicacy of manipulating phrasing and tempo is brilliantly on display in the breathtaking complexity of "Big Stuff," a song that Santi turns into a musical equivalent of a darkish expressionist film. The footage of a damaged life unravels in the elemental sadness of "What's New" as Santi dialogues with the eminently soft, almost vocal work of John Stenger's piano and so begins the descent into the nourish life of Billie Holiday. The stark portrait of "My Man" appears on a ghostly canvas daubed as if by the magic of a brush dipped in the "makuta" rhythm of drums and bass. The shock and awe of "Stormy Weather" is propelled by the rhythmic sweep of Central-African "palo" highlighted by a burbling ostinato that churns the melody and harmony into a veritable twister's vortex before Santi enters the narrative, breaking the verses of the song with a pirouetting "coro."

"You're My Thrill" is perhaps the most sensuous song on the album and "Travelin' Light" is a cross-hatching collision between the Cuban "guajira" and the second line rhythm so characteristic of New Orleans. "You get a sense of the interpreter (of the song) travelling light because I am only accompanied by the bass at one time; then by the piano; later the trumpet," Santi explains. The stately, shimmering rhythm of the Cuban "danzón" bathes "Involved Again," with Jon Thompson's sweet clarinet and the singer who is yearning for a new love in her life, yet realizes that she is a fool for love. This is a chart that Billie Holiday wanted dearly to record, but died before she could do so. Dick LaPalm, Nat "King" Cole's promoter suggested that Santi record this song. "It was extremely special to be mailed the lead sheet personally by the composer, Jack Reardon," Santi reveals somewhat in awe of being considered as an interpreter of a song that Ms. Holiday herself yearned to do.

"That Old Devil Called Love" sashays with the voluptuous ecstasy of "son-Abakuá" and is resplendent in the rich imagery of Afro-Cuban music. "There are codes here which only those who listen carefully will hear," Santi says, "including a quote from a famous Cuban song called "El Diablo Tun, Tun," she reveals, almost as a gentle challenge to anyone ready for it. "I Cover the Waterfront /Monk's Dream" is another song worked into the cracked rhythm of a Monk-like idiom and "You'd Better Go Now" is set to a deliciously sexy "yambú" rhythm that is beguiling despite its sad and lonesome lyric.

Perhaps the darkest part of the album is "Strange Fruit" a song that Billie Holiday's infused with the searing imagery of an ugly part of America's tainted history. Performed as a swaying "bolero" this chart infuses the horror of lynching in the deep south of the United States with a prayer to the Yoruba deity, "Oya." "She is the keeper of the cemetery gates and the fierce winds," Ms. Santi warns about a torch song that she sings with breathtaking power. "Strange Fruit is a political and graphic song. I am drawn to repertoire like that. "Strange Fruit," "My Man," "Good Bye Pork Pie Hat" - I have sung these for years," says Santi. "In this performance on the record I very much wanted to sing in a way where there is room for the audience to sing along to it again and I recall performing it in a way where I literally don't breathe." In many respects "Strange Fruit" is the crowning glory of Big Stuff. It is a song that Ms. Holiday never took lightly and neither does Santi.

A musician of rare and unbridled genius, Venissa Santi was born to parents who filled her life equally with the music of Celia Cruz, Maurice Ravel and Michael Jackson, and numerous other musicians. Her musical heritage goes further back: to a grandfather, Jacobo Ros Capablanca, a Cuban composer. She honored his memory by playing one of his songs on Bienvenida. Santi was born in Ithaca, New York, but moved to Philadelphia after she graduated high school. There, through the study of her grandfather`s compositions, she re-connected with her Cuban roots and majored in Jazz Vocal Performance at the University of the Arts. She was a vocal instructor at the Asociación de Músicos Latino Americanos. In 2008, Ms. Santi won the Pew Fellowship for Folk and Traditional Arts. In 2009 she was signed to Sunnyside Records. She went to Cuba specifically to study Afro-Cuban song, dance and percussion as well as to prepare for this project.

Reflecting on the past three years, Santi reflects, "It's sort of intense to think how close I've been to this repertoire and Billie's story. It's been an extremely existential experience."

Bandcamp Daily  your guide to the world of Bandcamp